A luminary walks among us: Nightingale award-winner noted for innovative military program 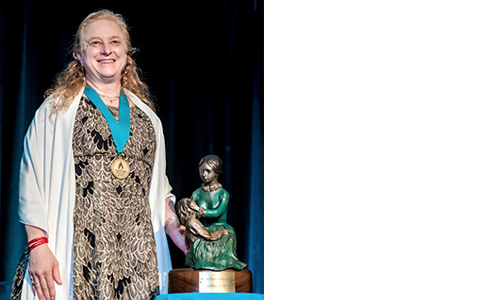 Mona Pearl Treyball, PhD, hoists a 20-plus-pound trophy up in the air for a guest to see. For the nursing professor, the bronze statue of a kneeling Florence Nightingale cradling a patient in her arms represents more than her recent win. It affirms her life’s work.


From the frontlines of the battlefield to the halls of academia, the retired Air Force colonel and University of Colorado College of Nursing professor has fought for the care and protection of this country’s military families for nearly 30 years.

Pearl Treyball is a 2019 winner of the Nightingale Luminary Award. The prestigious award recognizes excellence and innovation in nursing that extends Nightingale’s legacy.

CU Nursing program first of its kind in nation

One of 24 selected for the this year’s regional award (out of 255 nominations), and one of 12 selected from 60 luminaries across the state, Pearl Treyball won for her work as founder and specialty director of the Veteran and Military Health Care (VMHC) program on the CU Anschutz Medical Campus.

“It is the first program like this in a school or college of nursing in the nation, and the courses are the first of their kind to prepare nurses for an advanced practice career dedicated to caring for this special population,” Jean Scandlyn, PhD, associate professor in health and behavioral sciences at CU Denver, wrote in a nomination letter.

Fulfilling a growing need in Colorado and beyond

Colorado hosts large numbers of active duty and veteran military members, and the community extends beyond those members to family, friends and civilian employers, Scandlyn wrote. “Many of our students often come from rural areas of Colorado where many veterans and their families live and yet are often isolated, and their health issues are not understood.”

Online courses increase the program’s accessibility, which offers a variety of paths for specialization, from a graduate certificate to a doctorate degree.

Since its January 2015 inception, the program has grown in size and scope, with 70 students enrolled. A recently approved Doctor of Nursing Practice (DNP) program should launch in fall 2020, Pearl Treyball said. Other colleges have expressed interest, and Pearl Treyball foresees eventually expanding the program’s reach.

“We have so many people who have returned from putting their lives on the line for our nation, and they deserve the best care,” Pearl Treyball said. But a complicated health care system and a lack of cultural understanding often stand in the way, she said.

“There are conditions and circumstances that only the veteran population faces,” wrote one of Pearl Treyball’s graduates, Ssanyeka Barnes, MS. While many are visible, the program taught her that some are not, helping her evolve in her own practice, Barnes said.

Creating a curriculum on the intricacies of military culture came relatively easily for Pearl Treyball. A distinguished military career, cut short by medical retirement after a third bout with cancer, left her with a broad knowledge of service-member needs.

Pearl Treyball evacuated wounded personnel as a flight nurse, directed her own troops during war as a commander, and worked for changes at the Pentagon as a policy writer.

Her cancer journeys gave her personal experience with both military and veteran hospitals, and she raised a daughter with a Special Forces ex-husband, whose eventual Post Traumatic Stress Disorder contributed to the family’s breakup.

“I have a really strong family perspective, which gives me a holistic understanding in providing care, as our service members do not exist in isolation,” Pearl Treyball said.

Barnes called Pearl Treyball’s passion genuine and contagious. “I am blessed to have been a part of a platform that will continue to teach and guide others to care for our nation’s heroes.”