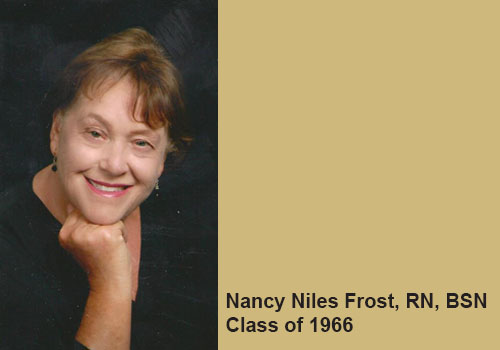 Nancy Niles Frost’s career has been driven by her nursing inspiration and her passion for providing exemplary care.

Frost’s journey with the nursing profession started long before she stepped into the classroom. From a young age, she was inspired by her aunt, Mary Margaret Miller, who practiced nursing in many different settings. Remembering her aunt, Frost recounts the various stories she heard growing up. Mary Margaret served as a nurse in World War II, provided care on a Native American Reservation, and was an OR nurse – all while traveling with her husband who was a Marine. Later she became the nursing director at St. Anthony Hospital. Frost notes that three of her first cousins including Mary Margaret’s own daughter, Marilyn Miller (BSN, Class of 67) became nurses, following in the family footsteps.

With her sights set on nursing, Frost knew she wanted to attend a university. At the time, nursing diplomas were common, but Aunt Mary Margaret emphasized the importance of a bachelor’s degree to her nieces and daughter. “I often thanked her for that foresight. It was the direction nursing was headed, and Mary Margaret always was ahead of the trend.”

In the fall of 1962, Frost began her nursing education at the University of Colorado College of Nursing (then the CU School of Nursing). “It was very different than it is now,” she recounts. At her 50th class reunion, she was encouraged to see much more diversity at the College. “So many students from different backgrounds. It’s amazing how nursing has grown. I was pleased to see that.”

As a student, it was important for Frost to be connected to a national nursing organization. She was a founding member and the Corresponding Secretary of Sigma Theta Tau at CU Nursing, an organization that supports the learning, knowledge, and professional development of nurses.

“I have so many memories of my time at CU. It was hard work, but we had a good time.” In the 1960s, CU Nursing celebrated the 100 Days Dinner, a banquet one hundred days before graduation where each graduating student received a pin. This night is one of Frost’s fondest memories. “We were feeling good that night, so we had a fire extinguisher fight in the residence hall,” she says with words coated in nostalgic laughter. “We had to clean it up, but we didn’t get in trouble. It was a rambunctious night!”

After graduating, Frost was grateful for her education and how prepared she was to enter the workforce. Diploma nurses had more hours in the clinical setting, but faculty assured the graduates that they would have the educational background to understand procedure. Frost attests that gaining the experience didn’t take long. “Because we were all so studied in anatomy, physiology, and chemistry, we were quite prepared for any case.”

Frost spent most of her career working within public health and as a School Board Nurse in Seminole County, Florida. “It was not what you think of as school nursing.” There were eight nurses for the public schools to consult, each serving five to eight schools a piece. These nurse consultants trained teachers and staff in medication administration, among other important topics. A point of pride for Frost was the use of CU-developed video trainings throughout her career.

“Never forget that patients are people with their own stories. Remember that.”

“I am so proud to be a CU Nursing graduate, as it has always been a well-respected and highly ranked program. I was awarded a scholarship, so CU became an easy choice for me. I feel like I ‘lucked into’ the best possible scenario.”

To the students today, Frost offers this advice: “Never forget that patients are people with their own stories. Remember that.” She has always loved working alongside other caring people, especially school social workers, with whom Frost worked very closely. “Nursing draws in a certain type of person, but with all the technology, we have to make sure that we continue to connect on a human level.