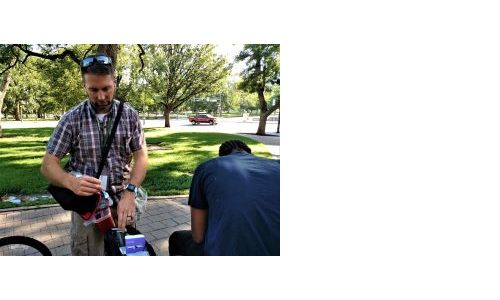 With an armed police officer and grocery cart stuffed with backpacks and suitcases behind him, Scott Harpin snapped on his latex gloves and fished out his supplies from a six-pack cooler.

“Which side?” Harpin asked, as he de-capped a needle. His patient tapped his left arm in response and rolled up his sleeve.

“I’ll try to avoid the ink,” Harpin said, quick with some tattoo-related wit designed for relaxing his patient as he aimed the needle just below the man’s left shoulder.

Hardly the sterile, quiet scene of a medical office, Harpin’s mobile clinic environment that bright July morning included trees, fountains and the roar of traffic as he circled Denver’s central Civic Center Park in search of people in need of hepatitis A shots.

“This is my chance to come out and be a nurse,” said Harpin, whose research and community service projects focus largely on the nation’s homeless health issues. “I miss the one-to-one contact,” said the popular instructor, whose genuine smile and upbeat personality worked well with the day’s slightly leery clientele. 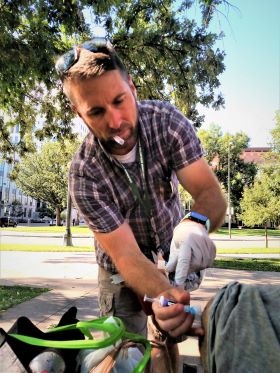 ‘One shot is better than no shot’

“No, I’m good,” a lone woman on a park bench said, rejecting the free vaccine offer after hearing Harpin and his partner’s spiel about the viral liver disease spreading through homeless encampments nationwide.

“Are you sure? We’re in an outbreak. People are getting sick, and it’s really easy to spread,” said Harpin, co-director of the DNP/MPH dual degree program educating tomorrow’s public health nurse leaders.

The woman shared a common concern expressed that day — the vaccine requires a booster in six months, a tough commitment with a transient lifestyle.

Although the woman stuck with her decision, a few people changed their minds after Harpin explained an initial dose supplied at least 75% protection (up to 95%) against the liver disease. “One shot is better than no shot,” he told them.

The threat is serious, particularly within large homeless populations. The unsanitary conditions of street living feed hepatitis A outbreaks. The virus spreads through infected stool, including via traces on the ground and unwashed hands. Washing hands with soap and water, often hard for people experiencing homelessness to do, was a chief message of the day.

Other routes of infection include sexual contact, shared smoking materials and IV drug use, with the opioid and homeless crises both boosting infection.

Although rarely fatal, the disease can kill people with compromised livers, such as those already infected with cirrhosis or hepatitis B or C. And it can make people really sick for as long as six months. A 2017 California outbreak centered on its homeless population, infecting 700 people and killing 21.

On the streets: ‘I can’t afford to get sick’

As of July 31 in Colorado, 106 cases and 75 hospitalizations had been reported in the state.

“Shoot me up,” one man said, sticking out his arm, after learning the disease’s transmission routes.

“I don’t want to get sick,” another man said. “I’m out here on the street, and I can’t afford to get sick. My health is already bad enough.”

With upwards of half of Colorado’s 10,000-plus homeless population entrenched in the Denver-metro area, health providers are offering free vaccine clinics across the city until the threat ceases. 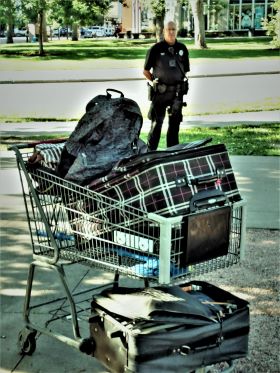 “This isn’t even the tip of the iceberg,” Denver Police Department Officer Toby Wilson said of the scores of homeless people filling the park.

Wilson works on the Homeless Outreach Team, monitoring and educating people generally in or near the city’s shelters.

Although it was his first time escorting a mobile vaccine clinic, his caring demeanor and ability to connect with people dramatically increased Harpin’s team’s success that day.

“He’s the hero,” Harpin said of Wilson, who, at times, was convincing people to get a vaccine faster than Harpin could keep up.

“Before we’d even gotten started, he called us over to check out a man who was sick,” Harpin said of Wilson. The man’s yellow skin and eyes were telltale hepatitis signs, and the team gave him a taxi voucher and sent him off for care.

“It’s an important drop in the bucket for public health,” Harpin said of his couple of hours of work that morning, which he does regularly. “Even if people have already been vaccinated, we are making connections with them and educating them,” he said. “We are letting them know that we are here for them and that we care.”

To volunteer for the city’s campaign, which has resulted in more than 4,200 people being vaccinated since October 2017, contact Allison Seidel at allison.seidel@dhha.org or 303-602-3587.