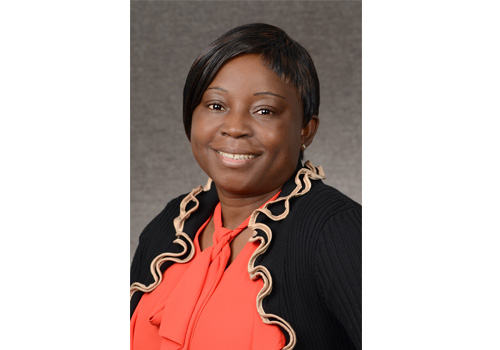 “At 13, I dropped out of school to take care of my siblings because my mother was extremely ill and my father left us,” said Yolande Ngounou, BSN ’19. A native of Cameroon (a Central African country), Ngounou recalled her childhood. “It was my job to help my family. I loved school so much, but I had to give it up.”

At the time, her mother was pregnant and suffering from pre-eclampsia. She fell into a coma but survived after a C-section and the birth of a son.

After her mother recovered, she told Ngounou how much she regretted her daughter’s sacrifice.

“I wanted to go back to school, but that wasn’t possible. So, I homeschooled and got my high school diploma,” said Ngounou. After obtaining her diploma, friends suggested a program called the Diversity Immigrant Visa program (also known as the visa lottery) where she could get to the U.S. and “have a better life.”

The DV program provides up to 50,000 immigrant visas available annually, drawn from random selection among all entries to individuals who are from countries with low rates of immigration to the United States. Distributed among six geographic regions, no single country can receive more than 7% of the available DVs in any one year.

Because Ngounou only spoke French (the native language of Cameroon) and had no money, she was reticent to apply. Without her knowledge, a family friend submitted her name.  Surprisingly, she won a spot. “My family had to convince me to go. They had a lot of confidence in me,” said Ngounou. “I was scared. Every time I raised a concern they would say, ‘You will learn. You can do it.’”

Her first stop was Philadelphia where she was matched to a fellow Cameroonian and his wife. The pair took advantage of her; they took her passport and identification and kept her virtually enslaved cooking, cleaning and taking care of their children while they went to school.

Sequestered in the house for a year, Ngounou had little contact with outsiders. Each time the U.S. government sent her green card and permanent visa (which would allow her to go to school) to the home, her host returned them. One day, her host family allowed her to take the children to the park, where she met a woman who spoke French.  Ngounou explained her situation. Together, they went to immigration with her story. An officer contacted her host, who subsequently threw her out.

Homeless with nowhere to go, she lived on the streets.

The Kindness of Strangers 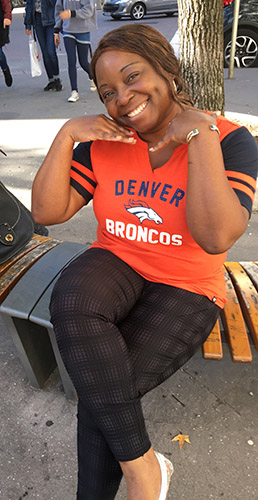 While homeless, “A lady came up to me. She was from Cameroon as well. She offered to take me home with her where I called my mother. I begged her to come home.”  Ngounou’s mother encouraged her to keep fighting as they barely had food to eat. She and her Good Samaritan met with immigration and retrieved her green card.

The woman saw Ngounou’s plight and agreed to help. “She told me about her cousin who was in Colorado studying nursing and suggested I move there.” She did. “I knew that if I wanted to stay in this country, I had to know how to speak and understand the language.” She started taking classes at Community College of Aurora.

For two years’ she immersed herself in becoming proficient in English. She also became pregnant with her first child and underwent a C-section at 36 weeks. Memories of her mother’s experience flooded back. “I was fearful that it was going to be the same, but it wasn’t. The level of care she received was amazing. Nursing in Cameroon is not like it is here.” Her experience made her think about a career in nursing. “The way they took care of me touched my heart,” said Ngounou.

Ngounou enrolled in CU Nursing’s BSN program and graduated in May 2019. “I loved the program. I was so lucky to have gotten into it,” said Ngounou who was working full-time while going to school. “They pushed me and it was difficult, but CU cared – from Shane Hoon in Admissions to faculty members like Sue Bonini whose door was always open.”

“It was rough. But I learned a lot from what happened to me. In the end, my story is really a happy story. And it shaped me for my work with veterans,” said Ngounou who works for the Veterans Administration.

“Helping people is my purpose in life,” said Ngounou who is helping two students go to school right now.
Categories: Bachelor of Science in Nursing (BSN) College of Nursing |