“The details of my life are quite inconsequential…very well, where do I begin?”—Austin Powers: International Man of Mystery 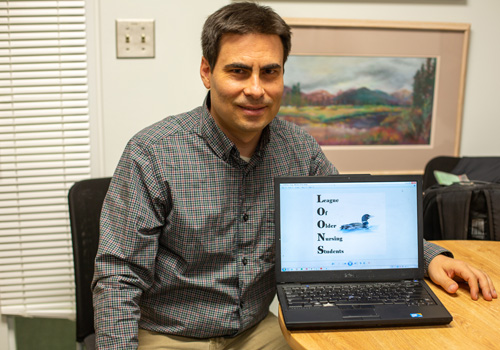 After receiving an undergraduate degree in Classical Studies from Colgate University in the 1990s, Wilson taught English in China for a few years. He then returned to the United States, where he waited tables, followed by a turn as an insurance agent. These “series of bad decisions,” as he calls them, have all made him who he is today.

In the mid-2000s, he earned his CNA and began working for the Veteran’s Administration (VA) from 2008 to 2012. He took a break and taught yoga. In 2014, “I re-evaluated where I was and decided I couldn’t make it as a yoga instructor/massage therapist.” So, he returned to the VA and decided to pursue a nursing degree through the UCAN program.

“I really like the VA. The nurse-to-patient ratio is low, so we can spend a lot of time caring for our patients.”

The VA sponsored him in school and through a little known initiative titled the National Nursing Education Initiative and the VA National Education for Employees Program, Wilson will graduate with minimal debt. The program paid his tuition and his salary during the program. All he has to do is work for the VA for the next three years. “I really like the VA. The nurse-to-patient ratio is low, so we can spend a lot of time caring for our patients.”

According to Wilson, “It’s been an interesting life, not necessarily an intelligent run.”

But that’s what makes Wilson unique. He brings a seasoned perspective to the program. One that includes a sense of humor and maturity.

As one of a dozen students over the age of 30 in the program, he founded the League of Older Nursing Students, also known as LOONS. The group supported each other during the program. “It’s hard to come back to school when you’re a little older. Learning how to learn and take tests is a skillset that you can lose over time,” said Wilson.