CU Nursing students transform health — even before they graduate 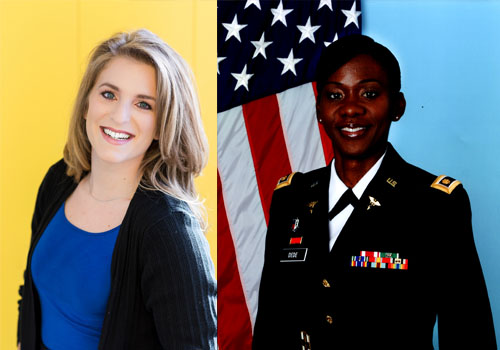 When College of Nursing student Elizabeth DePalma, (MSN, ’18), graduates and takes off into the wild, blue yonder, she’ll leave behind a potentially life-saving legacy.

For her doctoral project, the psychiatric nurse practitioner focused on whether training students in Mental Health First Aid (MHFA) could make a difference.

It turns out it does — and the U.S. Air Force (USAF) second lieutenant’s work remains on track for many MHFA trainings to come.

“What you are doing at this school is already having an impact, and it is noticeable,” CU Nursing Associate Professor Paul Cook, PhD, told DePalma.

With Faculty Advisor Nicole Brodrick, DNP, DePalma looked at both the University of Colorado Anschutz Medical Campus and the Colorado School of Mines campus in Golden for her research project. She noted that 10 percent of students on the campuses reported having “seriously considered suicide” in the past year.

Stigma and lack of mental health literacy prevent students from seeking professional treatment, DePalma said. But they do tend to talk to and listen to their peers when it comes to emotional health issues, which is why MHFA training makes sense, she said.

The evidence-based program created for the layperson provides action plans for people who notice someone struggling with a mental health problem. The eight-hour training includes certification for three years and increases mental health literacy while decreasing stigma, studies show.

DePalma’s study included training and observing a group of peer mentors from Mines and students in the Integrated Nursing Pathway program from CU Nursing. The increased rates of study participants who noticed and helped peers in crisis five months post training were statistically significant, she said.

“These are results from just one training done months ago. Imagine what will happen as we offer more,” said DePalma, whose work, funded with an American Psychiatric Nurses Association (APNA) grant, will continue on both campuses next year. “We’re talking about saving human lives here.”

More patients were treated — and treated faster — for sexually-transmitted infections (STIs) at the Evans Army Community Hospital in Fort Carson this past year, thanks to a University of Colorado College of Nursing graduate student. “We developed and implemented a standardized protocol targeting barriers that sometimes delay treatment,” Dede said. “These infections are epidemic nationwide, and this work can make a significant difference in people’s health both in the civilian and military populations,” she said.

Roadblocks to care that Dede identified included: 1) a lack of uniform procedures for the management of patients with STIs, 2) an overwhelming volume of positive tests for staff, 3) competing priorities within the organization, 4) a history of delay in making changes, and 5) a complicated process to navigate.

Dede’s main aim of her study was to increase the overall proportion of patients testing positive for chlamydia and gonorrhea who receive treatment from 75% to 85% by September 2019. Her secondary aim was to decrease the number of days between time of positive laboratory results to time of further testing and treatment to 10 days or fewer by September 2019.

Dede reached her goals. From May to September 2019, the percentage of chlamydia patients treated increased to 95%. Out of all the patients with positive gonorrhea results, only one follow-up appointment surpassed the 10-day mark. There was also an overall increase in the proportion of patients treated within 10 days of positive STI test results.

Dede’s efforts are set to continue at the Evans Army Community Hospital after she returns to an active duty post as a public health consultant. She is slated to present her study results as part of the annual Army-wide Public Health and Preventive Medicine course that attracts healthcare experts from around the world.
Categories: College of Nursing Doctor of Nursing Practice - DNP |