The events that shape us | Alumni Spotlight: Jan (Pickett) Sanko, BSN Class of 1986 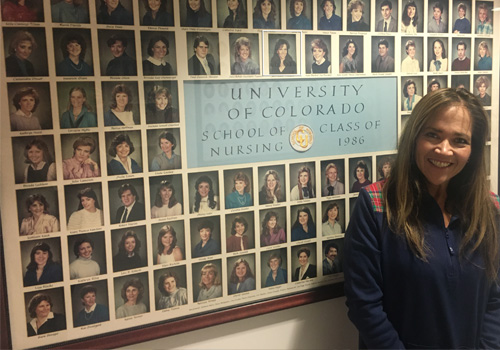 From the Challenger explosion that shook the nation to an earthquake that rocked Denver, some of Jan Sanko’s (BSN, ‘86) most memorable moments during her time with CU Nursing are tied to notable events.

A native of southern Indiana, Sanko moved to Colorado in 1981 with family. She had spent a couple of years after high school working, but she knew she wanted to do more.

“I always loved medicine and health care. It’s all so fascinating. I actually started in pre-med, but I wanted a family.”

Attracted by the diversity of specialties in nursing, Sanko saw the profession as a perfect means of blending her passions. Before attending CU Nursing, Sanko completed the prerequisites at the University of Colorado Denver, beginning her educational path to a reliable career.

Sanko, who served as CU Nursing class president in 1986, said the university provided a great experience. She recalls spending time in the courtyard on the Ninth Avenue campus in downtown Denver before the medical campus moved to Aurora. “We had graduation in the big Quad. On nice days, we would sit out there and study,” Sanko recalled.

Another moment that stood out for Sanko: “We were sitting in class in a big auditorium when the Challenger blew up,” she said, recalling the 1986 NASA explosion that changed the science of space exploration forever and impacted the lives and hearts of people around the world.

“One of our instructors announced it during class. That’s one of those things where you’re sitting there and whatever you are doing is branded in your mind.”

Sanko recalled another event when she was doing clinical rotations at the then-Fitzsimons Army Hospital (now Fitzsimons Building on the Anschutz Medical Campus). There was an earthquake in Denver. “I was in a patient’s room on the fifth floor, and I felt the shaking. It was a ‘wow’ moment.”

At first Sanko and staff didn’t know what it was, as earthquakes of that size are not common in Denver. The news confirmed their suspicions later that day.

Of course, Sanko acknowledged, these out-of-the-ordinary events aren’t all she remembers of her time at CU Nursing in the ‘80s. “Back then, there weren’t fancy mannequins. We practiced (injections) on oranges,” she says with a laugh. At the time, high-fidelity mannequin practice was limited.

Today, Sanko is living her nursing dream, providing critical care at the Centura Parker Adventist Hospital. “The ICU and ER are constantly challenging. Every day is different.” Since her time at CU, Sanko has developed an intense passion for pediatrics. She spent thirty years dedicated to the patients at Children’s Hospital before moving to Parker Adventist. “I’m still in touch with families and patients from over the years. Those early experiences really shaped me.”

In her spare time, Sanko enjoys being adventurous, she said. “In the summer, I spend a lot of time bicycling outdoors.” She also loves international travel, hiking 14ers and skiing, Sanko said.
Categories: College of Nursing |