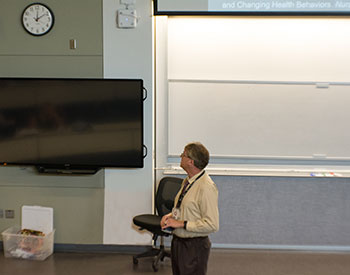 You’ve started a diet because your doctor mentioned you need to lose a few pounds. You agree. But there’s a brownie sitting right there on the table, and it looks so good. You eat the brownie.

Why do we so often make the unhealthy choice in these situations?

Paul Cook, PhD, Associate Professor at the University of Colorado College of Nursing, suggests that our brains have two distinct systems that influence how we approach health. A lack of alignment between the two systems explains why we routinely experience gaps between our good intentions and our actual health behaviors.

In Temporal Immediacy (2018), Cook and colleagues argue that health promotion, disease management, and behavior change each can be explained by Two Minds Theory, a novel perspective grounded in the work of Nobel laureate Daniel Kahneman. Health behaviors — like whether we eat that brownie — are a function of the brain’s intuitive system, while a separate narrative system produces our intentions for the future as well as our explanations for why we behaved as we did in the past.

According to the theory, the intuitive system and the narrative system operate independently.

The intuitive system is responsible for actions that are fast and automatic, allowing us to perform tasks like driving or catching a ball. This system can multitask, and operates mostly outside our awareness.

“We use our intuitive system when performing actions that come naturally,” Cook said. “For example, once you learn to drive, you are able to perform the action without thinking too much about it.”

In contrast, the narrative system involves conscious thoughts that we use to formulate goals, plans, beliefs, and actions. It strongly influences our perceptions of the past and our future motivations, allowing us to carefully plan how we want to behave in the future. The narrative system is what leads us to promise ourselves that next time we will overcome the temptation of sweets.

Changing health behaviors is challenging because the intuitive system has such a strong influence on our actions and habits. Furthermore, it is almost completely outside of our conscious awareness. This is why research has shown that education about a health issue isn’t effective, nor are health campaigns that use fear tactics. Most of the time these strategies work at the level of the narrative system; they may change people’s beliefs but they do not directly affect behaviors. In the worst-case scenario, efforts to persuade someone can actually increase their resistance to behavior change at the intuitive level.

“Having increased knowledge does not equate to behavior change,” said Cook. “What you get is someone who knows what they should do, but still doesn’t do it.”

But what if you really do need to lose a few pounds? Is there any hope?

Cook argued that Two Minds Theory can explain the effects of successful behavior change interventions that work outside the level of awareness. For instance, the field of behavioral economics has demonstrated that simple environmental changes, like putting healthier foods at eye level and unhealthy foods out of the way, can lead people to make better choices. Behavioral strategies involving practice and in-the-moment feedback using wearable technology are other ideas that fit the theory.

To make changes in your own health behaviors, Cook suggested trying mindfulness strategies. “When using mindfulness, we can change our health behaviors because we are able to pay closer attention to our actions,” he said. Two Minds Theory suggests that we do have the ability to pay conscious attention to our experiences and behaviors. Focusing the narrative system on what we are doing may give us a last-moment chance to reconsider, and maybe stop our hand before it actually reaches the brownie.

Paul Cook, PhD, is an Associate Professor and Licensed Psychologist at the CU College of Nursing.