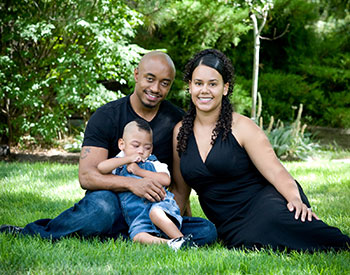 Originally a pre-med student and aspiring neonatologist, Karina Mays-Briscoe took a detour after the birth of her first child, Jayden, in 2008. “In that moment my life changed forever,” said Mays-Briscoe.

Jayden was born prematurely with an unexpected terminal illness that held a poor prognosis. Severely disabled, physically and mentally, Jayden seized up to 100 times a day, was G-tube fed, had multi-organ impairment, and was also deaf/blind, and nonverbal.

Intrigued by her 3-pound son, “I was terrified of the new life that laid before us. I saw all of the dreams we had for him vanish as I looked into his tiny bloodshot eyes and held onto his hand that was no bigger than a small baby doll’s.”

Jayden bravely fought for nearly four years before losing his battle in August of 2011. “His life was full of love, smiles, and an unthinkable amount of suffering,” recalled Mays-Briscoe. It was during this journey with him that she and her husband realized just how important and special nurses are. “Often times it was a nurse who went the extra mile to give many of our extended hospital stays some semblance of a ‘normal’ life,” said Mays-Briscoe.

It was a group of nurses who would sit and hold and talk to Jayden so that she and her husband could sneak away to the cafeteria late at night to eat a meal together. According to Mays-Briscoe, “The fact that he could not hear, see, or talk back is what amazed us when it came to the nurses talking to him as if he could. “ Not everyone was as comfortable interacting with him knowing this about him.

“Nurses played the role that I always imagined for myself. This became only more apparent when two of our three subsequent children also spent time in the NICU. Again, it was the nurse who left the lasting impression on our family.”

In the midst of it all, Mays-Briscoe graduated from the University of Colorado in 2013 with a Bachelor’s degree in Sociology and Business. This after making the decision to step away from medicine and focus on her grieving family. After graduation, she felt a stronger pull each year to pursue a nursing degree. “But I was nervous that it would not align with my goals as a homeschooling mom to our three children who were all under the age of 5,” said Mays-Briscoe. Her fears were alleviated when she learned of the accelerated nursing program (UCAN) through the University of Colorado College of Nursing at Anschutz Medical Campus and enrolled in 2017. Mays-Briscoe graduates with 96 of her fellow UCAN students Saturday, Dec. 15, 2018.

Throughout this year, she has constantly reaffirmed her commitment to serving others while growing a deeper understanding that she is exactly where she is meant to be. “I am honored to be given the opportunity to be a part of some of the most private moments life brings – from witnessing new life coming into this world to being there to provide comfort while a life is exiting. What a great privilege we as nurses hold!”